Here, we offer JBL Xtreme firmware update instructions for this great sounding portable Bluetooth speaker. This update can take up to thirty minutes depending on the speed of your internet connection. Plus, you cannot easily reverse it. You won’t be able to downgrade to the earlier firmware version once you complete this software upgrade. So, be sure that you truly wish the upgrade, considering all its potential gotchas before proceeding.

We were unable to update our JBL Xtreme firmware when we received this speaker at the time of this writing. Why? Because the firmware there was already at the current version. So, we borrowed some pictures below from the firmware updates we did on our JBL Charge 3 speaker. We used pictures of the Xtreme speaker where we could however. The firmware update processes are similar for both speakers. Finally, if or when we receive an actual firmware update notification for our Xtreme, we’ll update these photos to show the actual update in progress.

Get Connected to the Internet

You’ll need and internet connection, a Bluetooth enabled mobile or desktop computer device, and the JBL Connect Plus (Connect+) app, as well as the JBL Xtreme speaker itself.

So, get your mobile device connected to the internet and install the Connect+ app if you haven’t already.

Plug your JBL Xtreme into Reliable AC or Car Power

Connect your Xtreme to AC power. Why? Because we don’t want its internal battery going dead during the firmware update. This mishap could leave corrupted firmware in the speaker’s memory, and thus, render it useless and not repairable.

Pair your Speaker with your Internet Connected Mobile Device

Then, pair your phone or tablet with the Xtreme JBL speaker.

You are now ready to begin the firmware updating process on that JBL Bluetooth speaker.

JBL Xtreme Firmware Update, How To

1. Find the JBL Connect+ App on your Mobile Device

We found ours on the fourth home page in our Apple iPad Air, as shown next.

The app takes a few seconds to show you some nifty animations when you first start it. But then it finds your paired JBL Xtreme speaker and shows you its status screen, as shown next.

Note the explanation point inside the orange circle in the top right corner of the speaker’s picture, as pointed at by the dark green arrow. This means that there are important messages about this speaker pending for your to read and act upon.

Note that if there are no current messages or firmware updates available for this particular wireless speaker, then you will see no explanation point. Also note that the above picture, while it applies to the Charge 3 speaker, is similar to what you’d see with the JBL Xtreme.

Tapping the Important Messages (!) circle brings up the first IMPORTANT NOTICE screen about the available firmware upgrade, as shown next.

This screen gives details about the available firmware update. In our case here, it tells us that we need this upgrade to enable JBL Connect+ functionality on our Xtreme speaker. Specifically, this software upgrade enhances the speaker operation by allowing it to connect into a group of up to a hundred JBL Connect+ compatible wireless speakers, such that they all stream the same content. You would do this when you wish to blanket a large area with music for dancing for example.

4. Flick to the Left to See the Next IMPORTANT NOTICE Page

This page warns us that this particular speaker firmware cannot be undone, and that once done, this software upgrade is permanent in the JBL Xtreme. It also says that after this upgrade, the speaker will no longer be able to connect with other Xtreme Bluetooth speakers that are running older versions of the firmware. You will also lose connectivity with older speakers such as the JBL Flip 3, JBL Pulse 2, JBL Xtreme, JBL Boost, and Cinema 5B450.

5. Flick Once More to the Left to See the Next IMPORTANT NOTICE Page

Another left flick brings up the JBL Xtreme firmware upgrade confirmation prompt screen, as shown next.

JBL Xtreme Firmware Update: JBL Connect Plus app on iOS, similar to how it would look when paired with a JBL Xtreme Bluetooth speaker. Prompting for firmware update confirmation. You must tap the Install button to go ahead with the firmware installation.

This prompt again warns us that we won’t be able to fall back to the old firmware version once this upgrade finishes. It then asks us to decide whether to install the new firmware or to cancel the operation. We’re going ahead, in the next step.

Touching the INSTALL button brings up the Upgrade Speaker screen as shown next.

JBL Xtreme Firmware Update: JBL Connect Plus app on iOS, connected with an Xtreme speaker. Prompting to plug in the speaker to AC power to update its firmware.

This page tells us to connect our Xtreme speaker to AC power if we’ve not done so already (You would have already done this if you were following the instructions in the preliminaries section above).

7. Connect the JBL Xtreme to AC Power if Not Done Already

We connected our Xtreme to an AC outlet in the preliminary firmware update steps above, via the included power adapter and cable, as shown in the next picture.

8. Tap the OK Button on the Upgrade Speaker Screen

Next, go back to the JBL Connect+ app running on your mobile device, and tap the OK button. See this button in the last screenshot picture above.

The JBL Xtreme firmware update then begins, with the download of the software upgrade file from the internet, through your mobile device, to the speaker via the Bluetooth connection, as shown in the next screenshots.

JBL Xtreme Firmware Update: JBL Connect Plus app on iOS, connected with a JBL Xtreme Bluetooth speaker. Displaying the -Transferring Firmware Update File- page as the new firmware file is copied from the mobile device to the speaker.

Copying the file from the internet to the speaker is the slowest part of the firmware upgrade process. But as shown in these screenshots, the JBL Connect+ app shows you a progress pie-chart picture, that gradually becomes more orange as the firmware file transfer proceeds.

This was probably around fourteen minutes into the firmware update at this point in the process.

The next screenshot shows the upgrade file transfer at 65.7 percent complete.

The next screen shows that the firmware file transfer to the speaker has finished (100 percent done). The pie chart is completely orange now.

Once the app copies the upgrade file to the Xtreme speaker, you get the Upgrade Successful screen, as shown next.

However, note that the JBL Xtreme is still upgrading to the new firmware for nearly a minute after you first see this green and white screen. Thus, this screen warns that our speaker will restart automatically after it installs the new firmware. It then asks us not to unplug the Xtreme while it’s running the update process.

9. Wait for the JBL Xtreme to Shut Off

Watch the power light on the speaker, as shown next.

Eventually it will go dark, as shown next, pointed at by the green arrow.

The Xtreme may or may not turn itself back on again after the upgrade. Ours did not. So if, like ours, yours did not come back up, then go ahead with the next step (Step 10). But if yours did come back online though, then skip Step 10 and pick up with Step 11.

10. Power On the JBL Xtreme

Press the dark Power button to turn this Bluetooth speaker on again. It should again pair with your mobile device where you’re running the JBL Connect Plus app. The Power button turns solid blue with your speaker has successfully paired again with your tablet or phone, as shown next.

With your Xtreme successfully paired to the JBL Connect+ app again, press the green Done button in the Connect+ app, as shown in the last screenshot above.

The app then displays the JBL Xtreme speaker status screen once again. However, this time, note that there’s no longer the orange circled explanation point (!) , as shown next. This indicates that the firmware update succeeded and that the speaker is now running the current firmware version.

How to Update JBL Xtreme Firmware?

The firmware upgrades for 2018 and beyond are installed as described in this post.

How do you Install the JBL Xtreme Connect+ Update?

The Connect+ update refers to a version of the JBL speaker firmware released in the 2017-2018 time frame, that enables Connect+ functions on later model JBL Bluetooth speakers. This firmware enables connecting multiple speakers together so that all of them play the same content, like the multi-room music feature on the Alexa and Google Home smart speakers. You install this particular firmware just as you do any other firmware version, as described earlier in this post.

How to Get the JBL Xtreme Firmware Update Download?

When you update a JBL speaker via the Connect+ app, the app automatically downloads the latest firmware to your mobile device. Then, it transfers it to the speaker. So you needn’t download the firmware file yourself.

How do you Run a JBL Streme Firmware Check?

Each time you run the Connect+ app on a mobile device to which a JBL speaker is paired, the app automatically checks to see if the connected speaker has the latest firmware available. If it does not, it will prompt you to perform the firmware update, just as we did in this post.

How to Update JBL Xtreme to Connect Plus?

How do I Perform a JBL Xtreme Upgrade to Connect Plus?

Current and later versions of JBL Bluetooth speaker firmware support Connect Plus functionality. So, updating your speaker to the latest firmware, as discussed above, automatically enables the Connect+ feature if your speaker is compatible. Thus, to get Connect+ on speakers for which it has been released, just follow our procedure above for firmware upgrading. 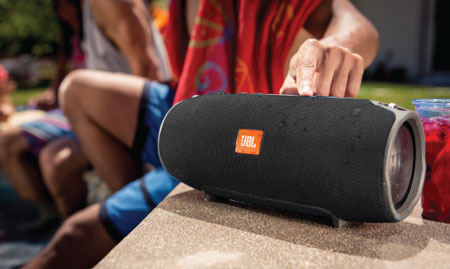 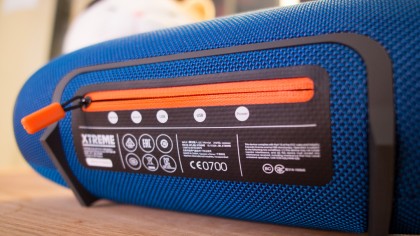